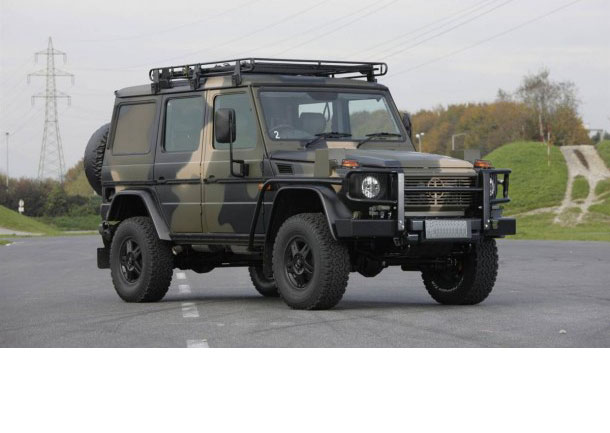 It’s been more than 8 months in the works; negotiations, debates regarding specifications and eventual production and use, but the final balance payment was released by the State of Minnesota to Mercedes-Benz today, finalizing the sale of 9 military spec Mercedes-Benz G Wagen vehicles to the Minnesota National Guard.

“Dave mentioned these Mercedes army trucks that they use all over the world, and I’d seen them back in the late 1970s when I was stationed in Germany, he thought they’d be a great recruiting and public relations vehicle for us, I just took the idea and ran with it… all the way to the State House.”

According to sources in the Minnesota State Capitol funding was “not immediately forthcoming” for what some perceived as an unnecessary ‘pet project’ but the Major General can be persuasive and with some creative use of available discounts from Mercedes Benz and USAA, funding was eventually secured for the project.

Dave Tobin of the Dave Knows Cars Blog insists he “was just joking when (he) mentioned how cool it would be for the Minnesota National Guard to have a fleet of military spec G Wagens, but General Oates had the vision to use a fleet of specialty military vehicles as a recruiting and public relations tool and wouldn’t let the idea go.”

“General Oates was an interesting guy to meet and work with on this project,” says Tobin “after just a couple of conversations he knew what he wanted and he knew who to talk to in St. Paul to get the funding to purchase them.  In fact, he was a pretty shrewd negotiator and, because his wife is currently in a Mercedes-Benz E class lease he was able to apply the ’lease loyalty discount’ to the G Wagens and because the vehicles were for the military, they were able to apply the aggressive USAA discount to each vehicle purchased, General Oates saved Minnesota tax payers a LOT Of money with these discounts.”

While Mercedes-Benz G Wagens are in use by more than 30 militaries around the world, including most Western European countries and Canada the U.S. has always produced their own military transportation, most recently the AM General HMVEE.

The vehicles were recently produced at the Steyr Daimler Puch factory in Graz, Austria. While the new fleet of G Wagens are fully militarized, several with mounted Browning .50 caliber machine guns, most will see little more action in the Minnesota National Guard beyond recruiting and public relations efforts.

“Hum Vees are great vehicles in combat, but they lack a certain ‘refinement’ that the G Wagen, even in military trim can deliver,” says General Oates, “With dwindling numbers in our ranks, these G Wagens will be instrumental in reaching the public and potential National Guard recruits.”

The fleet of G Wagens will be stationed at Fort Snelling, near the Minneapolis / St. Paul International Airport (MSP). They’re due to be delivered in early June, just in time to be introduced to the public and be shown at the Mercedes-Benz Club of America’s Twin Cities Section 17th Annual German Car Fest at Veteran’s Memorial Park in Shakopee, MN June 12, 2011.